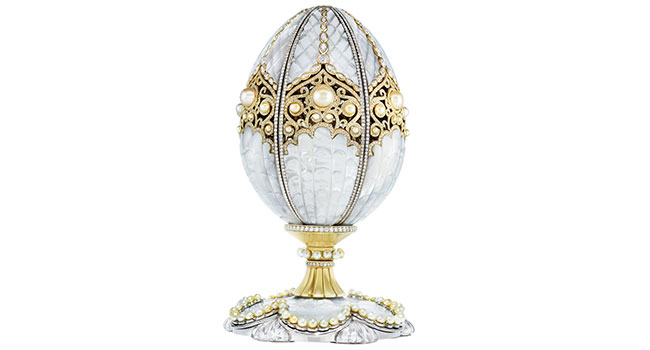 Crafted in white and yellow gold set with 139 fine white pearls, 3305 diamonds, carved rock crystal and mother-of-pearl, the egg is the first created in Faberge’s ‘Imperial Class’ since 1917. It is accompanied by a Fabergé white pearl, diamond and mother of pearl necklace finished with a 19.44 carat white pearl drop. Hussain Ibrahim Al-Fardan, chairman of the Alfardan Group and owner of one of the world’s largest pearl collections, “hand selected” every pearl featured on the new egg. He said he partnered with Fabergé to combine two traditional treasures, the Fabergé Egg and natural Arabian Gulf pearls, “to create an exceptional piece”.

“I have a passion for natural pearls and it took me many years to build my current collection gathering some of the most extraordinary pearls in the world.”

“Fabergé has a great history in making jewellery for royalty and a truly precious Fabergé Egg is a luxury treasure and the symbol of a long-gone era of opulence.”

The Al-Fardan family of Qatar is one of the oldest and most successful traditional pearl merchants in the Gulf. Hussain Ibrahim Al-Fardanand opened Alfardan Jewellery in Doha in 1954 and is now the exclusive retailer for Fabergé in Qatar. In addition, he established one of the largest and most exceptional natural pearl collections in the world, part of which is housed as a permanent exhibition in Doha and has been displayed in international museums such as the Victoria and Albert Museum in London.

The Fabergé Imperial Easter Eggs were commissioned by the Russian Imperial Family as “Easter Eggs” between 1885 and 1916 with the last one delivered in 1917. Of the 50 eggs Fabergé made for the Imperial family, 42 have survived.

Read below for related stories: