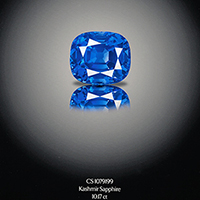 Robber escapes with $149m in bling

An armed robber stole jewellery valued at around $149m at a jewellery exhibition in Cannes on the weekend.