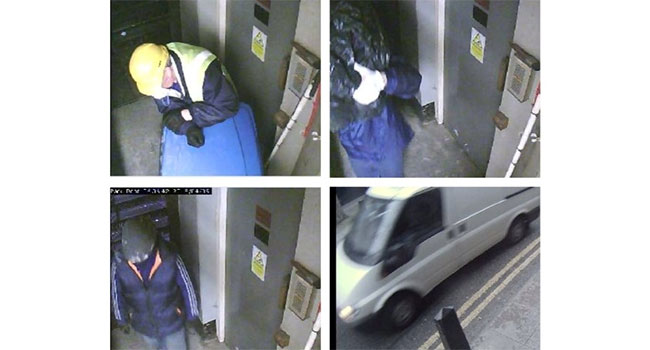 Police have released CCTV images of the robbers who stole millions of pounds worth of jewellery from 72 safety deposits boxes in London’s Hatton Garden. Detective Chief Inspector Paul Johnson, the officer in charge of the investigation into the robbery, said the thieves were “highly audacious” as they entered the Hatton Garden Safety Deposit building on two separate occasions over the Easter weekend.

Detective Chief Inspector Johnson said police were initially called to the HGSD building at 8:10am on Tuesday April 7 following reports of a burglary.
HGSD is located in the basement of a building that includes a number of other businesses and one communal entrance.

Detective Chief Inspector Johnson said there was no sign of forced entry to the outside of the building but “the thieves had disabled the communal lift on the second floor and then used the lift shaft to climb down into the basement.

“They forced open shutter doors into the basement where HGSD is, then made their way to the vault, where they used a heavy duty drill (Hilti DD350) to bore holes into the vault wall which is two metres thick and made of re-enforced concrete.”

He said the crime scene was “chaotic”. The vault was “covered in dust and debris” and the floor was “strewn with discarded safety deposit boxes and numerous power tools, including an angle grinder, concrete drills and crowbars”.

Seventy two out of 999 safety deposit boxes in the vault were opened. Of these, seven were vacant, and 11 were due to be drilled out for non-payment of fees.