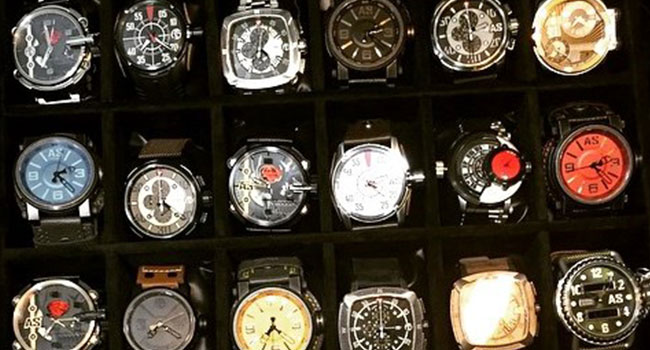 A selection of watches from the Arnold Schwarzenegger collection

Although Schwarzenegger has previously lent his name to several watches produced by Audemars Piguet, the new watch collection, created in partnership with  Brazilian watchmaker Magnum Group, is very much Schwarzenegger’s own brand as he played a major role in the design of every model.

The collection features 104 SKUs in three major collections:
•    The Legend Collection – “inspired by the metallic, military style tools and weight room equipment reminiscent of Schwarzenegger’s early career”.
•    The Hero Collection – “conjures images of Schwarzenegger in his most iconic roles”.
•    The Heritage Collection – “presents a sleek line of authoritative classic timepieces that convey a man of strength and leadership, with an edge”.
The core market for the collection will be 20-55-year-old men who “like to differentiate themselves from the regular crowd (self-confident, entrepreneurs, natural leaders)”.

Schwarzenegger met Roberto Graziano, the owner of the Magnum Group, through his wife Ana Paula who manages the Arnold Classic sporting event in Brazil. Two years ago Schwarzenegger told Graziano that he would like to create his own watch brand and Graziano told him he would help realise his dream. Magnum Group spokesperson Cristina Rashidian said Schwarzenegger always had an interest in developing his own watch collection according to his values and characteristics such as “big (50mm and more), bold and durable”. She said buyers and media at Baselworld had responded positively to the collection.

“We were really happy and honoured about the positive feedback on the watch characteristics, price points and product positioning.”

She stressed that Schwarzenegger’s unveiling at Baselworld was simply a preview.

“The official launch will take place in the second half of this year,” she said.

“This major launch will adopt a 360 marketing approach. Arnold Schwarzenegger is the brand ambassador and his support will be adopted to leverage the marketing plan even more.”