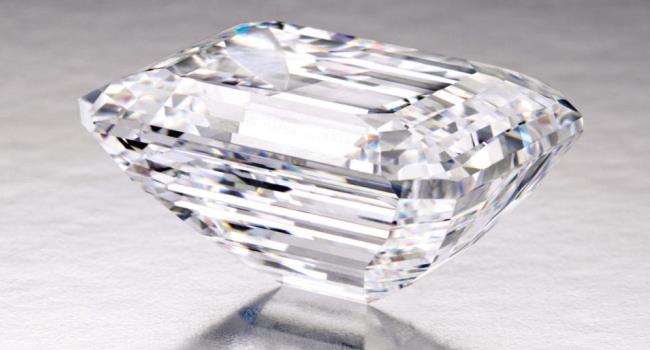 Sotheby’s has unveiled “a 100 carat perfect diamond” in a classic emerald-cut.
The 100.20 carat D colour, internally flawless, Type IIa stone will highlight Sotheby’s Magnificent Jewels auction in New York on April 21 when it is expected to sell for US$19-25 million.
Describing the diamond as “the definition of perfection”, Gary Schuler, head of Sotheby’s Jewelry Department in New York said the diamond is “unlike any offered before.
“The colour is whiter than white, it is free of any internal imperfections, and so transparent that I can only compare it to a pool of icy water,” he said.
“At this impressive scale, diamonds of this exceptional quality – D colour and Internally Flawless clarity – are incredibly rare, and are considered ‘perfect’,” he said
“The diamond joins an elite group of just five comparable-quality diamonds over 100
carats that have ever been sold at auction worldwide –‘The Mouawad Splendour’ (101.84cts) which sold for US$12.7 million in 1990; ‘The Star of Happiness’ (100.3cts)
which sold for US$11.9 million in 1993; ‘The Star of the Season’ (100.10cts) which sold for US$16.5 million in 1995; ‘The Winston Legacy’ (101.73 carats) which sold for US$26.7 million in 2013 and the Spectacular Oval Diamond (118.28cts) which sold for US$30.6 million in 2013.
“What distinguishes the present example within this rarefied league is its beautiful shape: it is the largest perfect diamond with a classic emerald-cut ever to be offered at auction.
“This modern shape gives the stone an unforgettable presence, whether it is worn as a jewel or admired on its own.”
The diamond, which was cut and polished from a rough weighing over 200 carats mined by De Beers in southern Africa, will be exhibited in Dubai, Los Angeles, Hong Kong, London and Doha, before returning to New York for exhibition prior to the auction.
Since 1990, when Sotheby’s sold the first 100-carat perfect diamond at auction, until the most recent example in 2013, the price per carat for the stones has increased from US $125,000 to US$260,000.
The current stone’s estimate of US$19 million represents a valuation of US$190,000 per
carat.