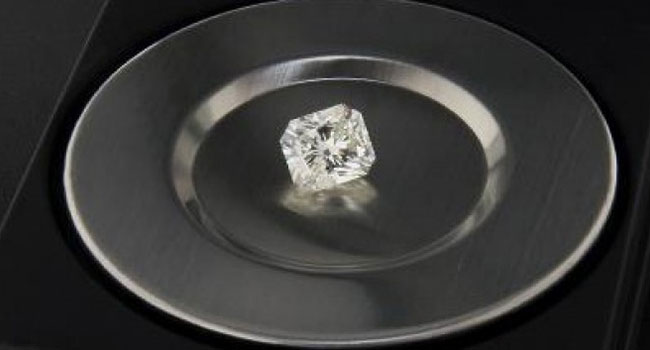 Just six months after US based Pure Grown Diamonds announced that it had created the world’s biggest colourless diamond – a three carat K SI1 stone – Russia’s New Diamond Technology has announced that it has superseded the American record by more than two carats by with a 5.11 carat K S1 diamond.

The ‘Big Tamazi’ diamond, named in honour of the Russian synthetic diamond manufacturer’s president Tamazi Khikhinashvili, was cut from a 10.31 carat stone.

Alexander Kolyadin, the CEO of INREAL, the parent company of  New Diamond Technology, recently told Rough&Polished that it had developed a proprietary technology for the commercial cultivation of nitrogen-free colourless (type IIa) large diamonds (4 to 10 carats) using cubic presses and the HPHT method.

He said the technology enabled the company to grow nine D, E and F coloured stones totalling 45 carats in a single run.

“Currently, GIA is performing a comprehensive study of a batch of our colourless diamonds belonging to top grade colours (D, E, F) and having good quality characteristics (VVS-VS-SI1).

“We hope that after completing the study of our polished diamonds GIA will publish an ample article containing the results of this research in their collected works.

“In addition after a series of meetings with the Swiss Gemmological Institute, they expressed a strong desire to use our polished diamonds to define more exactly all the property nuances associated with synthetic diamonds on their newly created high-performance devices.”

Khikhinashvili said that in the near future New Diamond Technology will start the production of round cut diamonds weighing up to 4 carats with colours D, E, F and clarity from VVS to SI1.