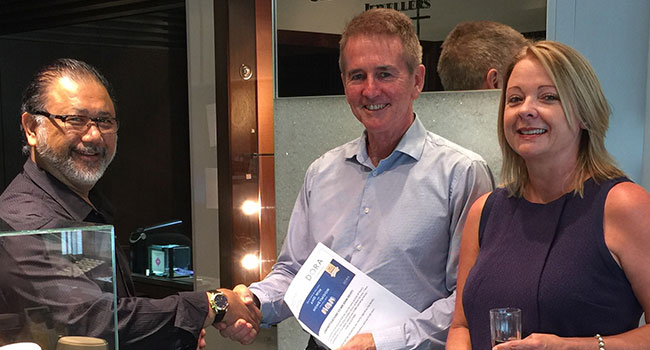 A West Australian couple has won the major prize, a European honeymoon valued at $7000, in RJ Scanlan’s Dora wedding ring promotion.
The winning couple, John and Sharon Devitt, purchased their Dora wedding ring (a Platinum 600 band) from Charles Edward Jewellers in Perth.
RJ Scanlan also awarded a $2000 Dora credit to the store and $1000 cash to Samir Catic, the salesperson who sold the ring.

RJ Scanlan marketing manager Chris Scanlan said the ‘Honeymoon Promotion’ enabled every purchaser of a Dora wedding ring from September 1 to February 1 to register for the major prize (which includes flights for two people to Rome, Paris or Istanbul, seven nights’ accommodation and $1000 spending money) on Dora’s Facebook page – and also be in the running for a $500 monthly prize.

Scanlan said that the company promoted the competition in Bride to Be, Cosmo Brides and Modern Weddings magazines, as well as the Dora website. Scanlan said the company’s last major promotion for the Dora brand was run about five years ago.

“It was called the Dora Cash Accumulator,” he said.

“Basically for every ring sold a store would get a voucher that went into a monthly draw to win a cash prize at the end of that month – it was an inhouse competition, meant only for the jewellers. It was quite successful, but this time we wanted to make the promotion a consumer competition to create some excitement in-store for both the retailer and the shopper, and to also build brand awareness.”

Stocked in 300 stores in Australia and New Zealand, the Dora range is comprised of “well over 3000 styles” which can all be personally altered to suit customers’ needs.

Most are available in 9, 14 and 18 carat gold as well as platinum, palladium and titanium – with or without diamonds.