MILAN, ITALY: DECEMBER 7, 2017 – CIBJO President Gaetano Cavalieri has voiced the World Jewellery Confederation’s support for a De Beers development project that employs blockchain technology, which was announced on December 4 by the group’s CEO, Bruce Cleaver. When operational, it should enable a diamond’s journey through the value chain to be recorded in a secure digital registry by all parties handling the stone, thus creating a transparent method of traceability that is accessible to the entire gemstone and jewellery business.

“This has the potential of being a game changer, with new technologies offering solutions to a challenge that has been notoriously difficult to achieve to date,” said Dr. Cavalieri. “While we still are waiting for more information from De Beers about how specifically the system can be applied to diamonds, we are well aware of blockchain’s capacity to record for perpetuity chains of transactions, allowing goods to be traced back to their source. 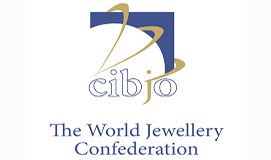 CIBJO strongly advocates for the creation of monitored chains of custody, Dr. Cavalieri said, with the goal being to defend the ethical integrity of products in the gemstone and jewellery trades. At the same time, the confederation has in past expressed concern that more cumbersome due-diligence systems that have been created to meet this objective may disadvantage smaller and medium-sized companies, which lack the resources to put them in place. However, a cloud-based blockchain platform, which is both tamper-proof and accessible to all members of trade, has the potential of eliminating financial barriers of entry, while also being more reliable and effective than a paper-based trail.

“We greatly appreciate the investment that De Beers is making on behalf of the industry in general. I have expressed these thoughts to Mr. Cleaver, and also offered the support of CIBJO and our members during the development process. If successful, this should be a tool that works to all of our benefit, and also that of our consumers,” said Dr. Cavalieri.