Skip to content
Like almost all precious and semi-precious gemstones topaz and tanzanite are increasingly being enhanced with treatments. 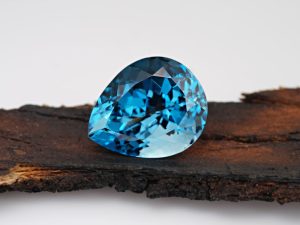 The ever popular topaz is one of the most commonly treated gemstones. In its natural state, the gem comes in a variety of colours including light blue, yellow or yellow/peachy orange, pink and ‘colourless’.

Blue topaz is the most common topaz on the Australian jewellery market – more specifically it is usually an electric or very deep blue topaz, often called ‘London Blue’, produced by heat and irradiation treatments.

Less well known is the fact that topaz is now being increasingly treated with coatings and diffusion.

Coating can produce a number of different colours including blue, green and pink as well as an odd effect (like oil on water) called ‘mystic’. The treatment may be detected by visual observation under a 10x lens by looking for chipped or worn facet edges which differ in colour from the body colour of the stone or surface iridescence. Using a microscope, the colour may appear inconsistent over the surface of the stone in a ‘sputter’ or ‘dot matrix’ type of appearance.

Sometimes, common sense may be enough to ring alarm bells that a coating treatment has been used. For example to most observers with a basic knowledge of gems, ‘mystic’ topaz looks ‘unnatural’. In addition a gem which is rare in nature yet readily available and reasonably affordable should also serve as a warning to a buyer.

Unfortunately, many buyers assume that because a gem, such as topaz, is called ‘semi-precious’ that it may not be treated or are not aware that some varieties of the gem may command prices to challenge many a ‘precious’ gem. Pink topaz is an excellent example. Very rare in a natural untreated state, the gem is difficult to source in pairs or suites and thus commands a corresponding high price. Buyers should therefore be aware that in recent times there has been a proliferation of pink coated topaz on the market, available not just in single stones but also whole suites in up to fairly large sizes.

Diffusion treatment, where a gem is subjected to a high temperature in the presence of one or more chemicals to change its original colour, has gained increased press coverage in recent years particularly in relation to rubies and sapphires. However, this treatment is now also being used by Serenity Co (Swarovski) on topaz to produce blue. Detection is possible with the use of X-ray photoelectron spectroscopy.

Tanzanite is the romantic name bestowed by Tiffany & Co for a variety of zoisite found and named after its country of origin, Tanzania. The stone boasts a very attractive deep blue colour with varying degrees of a purple flash but buyers should be aware that the colour is only possible due to treatment.

Out of the ground, zoisite is generally either brown or a brownish-green. For the overwhelming majority of tanzanite on the market today the rough stone has to be heated to produce the desirable colour. This treatment, like most heat treatments, is stable and quite acceptable.

A down-side of the heat treatment is that producing a deep colour in small stones is not possible. This may be the reason why coating has now become a more popular treatment.

As with coated topaz, coated tanzanite is not necessarily difficult to detect but is often overlooked because of ignorance of the treatment existing in the first place. The first step in examining tanzanite should be to place the stone in water and examine facet edges and the surface of the gem for coating abrasions. This can also be done by using a 10x loupe. Under magnification, coated tanzanite will have look as though there are numerous tiny holes across the surface. With the addition of a fibre-optic light, whitish surface marks may also be apparent.

As with topaz, common sense should also apply to detecting coated tanzanite. Small stones which have a particularly good colour or stones with prices that are ‘too good to be true’ should all be treated with some skepticism.

To create further confusion about topaz, tanzanite and their respective treatments it has recently been reported that natural topaz coated to imitate tanzanite had just been released on the market in cut stones and beads.

As usual buyers should keep their knowledge of gemstones and treatments up-to-date and remember that under ACCC regulations all gemstone treatments need to be disclosed to the consumer.