The second boutique for Rohan Jewellery, shares housing space with Perth’s state buildings including Perth Town Hall, St George’s Cathedral, the City of Perth Library, The Deanery, the State Administrative Tribunal building, and a new Mirvac office tower.According to Milne, the focus shining on West Australian artisans aligns with Rohan’s view of premium Australian stones and metals incorporated in traditionally handcrafted jewellery. This, coupled with the rich history of the state buildings and the revitalized city of Perth, makes Cathedral Square their final choice for the second boutique opening. 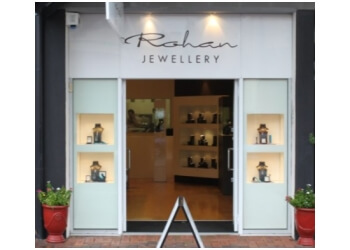 Rohan Milne, owner of Rohan Jewellery, started his apprenticeship in 1995 at the age of 17. During these early years, he spent time working in New York with world famous designer, Henry Dunay, exposing him to the amazing design and precision of a world class manufacturing jeweller.

After New York, Rohan found himself in Italy, working with designing and manufacturing jewellers, Guccione. This family run company specialized in jewellery for European religious and political officials and the nobility. This gave Milne the extraordinary experience of receiving a commission from the Belize Ambassador for 2 pairs of cufflinks to be presented to Pope Benedict XVI and Italian Prime Minister, Silvio Berlusconi.

Rohan Jewellery offers Art Deco style designs based around precious stones. They are one of only 30 Argyle Pink Diamond Select Ateliers in the world.