MOSCOW, RUSSIAN FEDERATION: JANUARY 25, 2018 – The Ministry of Finance of the Russian Federation has concluded a Memorandum of Understanding with CIBJO, the World Jewellery Confederation, and the Antwerp World Diamond Centre (AWDC), with the goal of harmonizing the official system used in Russia for the classification of polished diamonds with the standards and nomenclature applied internationally. The agreement was signed on January 24, 2018, in the Russian capital by Alexei Vladmirovich Moiseev, Deputy Finance Minister of the Russian Federation, Gaetano Cavalieri, President of CIBJO, and Stephane Fischler, President of AWDC. 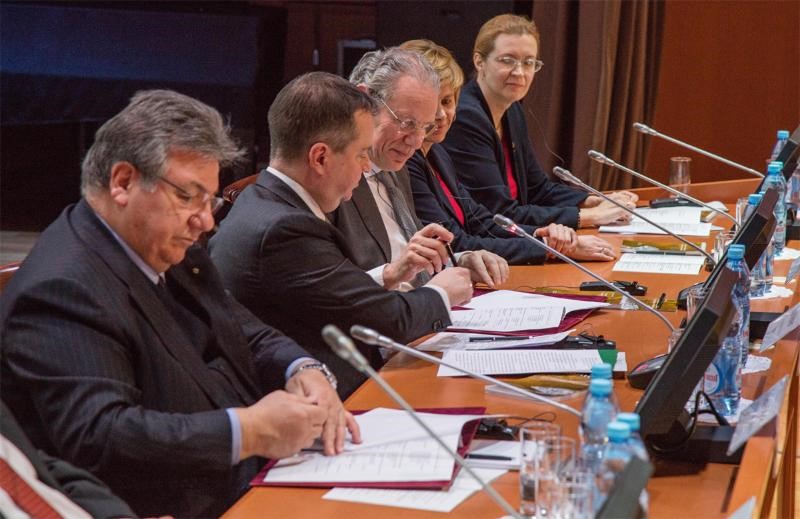 Signing the MOU in Moscow on January 25 (from left): Dr. Gaetano Cavalieri, CIBJO President; Alexei Vladmirovich Moiseev, Deputy Finance Minister of the Russian Federation; and Stephane Fischler, AWDC President. To their left are seated Ans Anthonis, of HRD Antwerp, and Tatiana Gorelenkova, of Gokhran of Russia.

In the MOU, the parties agreed to define the priority areas where harmonization is critical, and to formulate ways of achieving it in the most accurate way possible. The object of the agreement is to ensure that the system by which polished diamonds are classified and described in the Russian Federation are in accordance with the most widely accepted standards in the international trade.

“The ultimate aim of this agreement is to achieve absolute transparency in a worldwide business, where a dealer working in one country can communicate accurately and correctly with a dealer in another country, and the welfare and the confidence of consumers are properly defended,” said Dr. Cavalieri. “We work in an industry where any one item of jewellery is likely to be comprised of components mined and produced in a multitude of countries. Among ourselves we might speak in a variety of languages and dialects, but when it comes to describing the products, we must have a single reference guide, irrespective from where they were sourced. This is what makes this latest agreement so important, and we hope that it will be followed by others.”

Dr. Cavalieri thanked the Russian government, the head of Gokhran Andrey Yurin and his team, for their ongoing cooperation. Gokhran is the state repository with responsibility for precious metals and gemstones. He paid special thanks to AWDC and its President, Stephane Fischler, for helping initiate the discussion and bring it to a successful result. He was accompanied by Moscow by Udi Sheintal, President of the CIBJO Diamond Commission, and Jean-Pierre Chalain, Vice President of the CIBJO Diamond Commission.

The CIBJO Diamond Blue Book was the reference document used in the discussions between the Russian Government, CIBJO and AWDC, and is widely recognized as the most universally accepted delineation of polished diamond grading standards and nomenclature, along with the International Standards Organisation’s ISO 18323 Standard (“Jewellery – Consumer confidence in the diamond industry”), which closely parallels the CIBJO document. At the CIBJO Congress in Bangkok last November, the final stages of an agreement bringing the rules of International Diamond Council (IDC) in line with the Diamond Blue Book were completed, cementing the CIBJO document’s status as the primary reference book for nomenclature in the diamond and jewellery business. 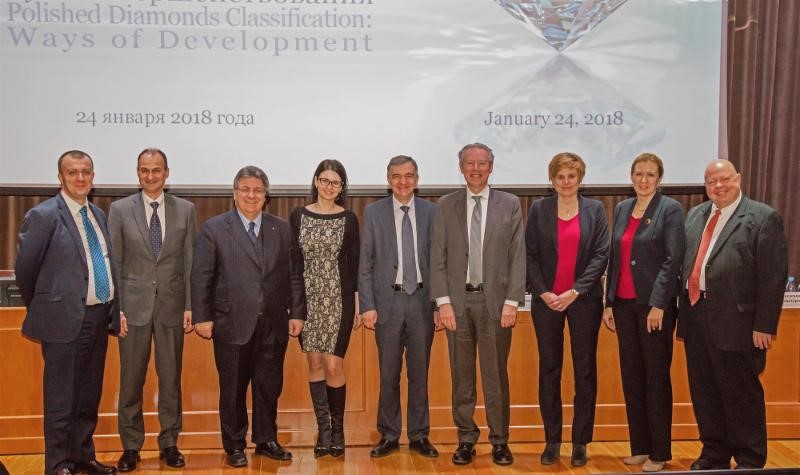