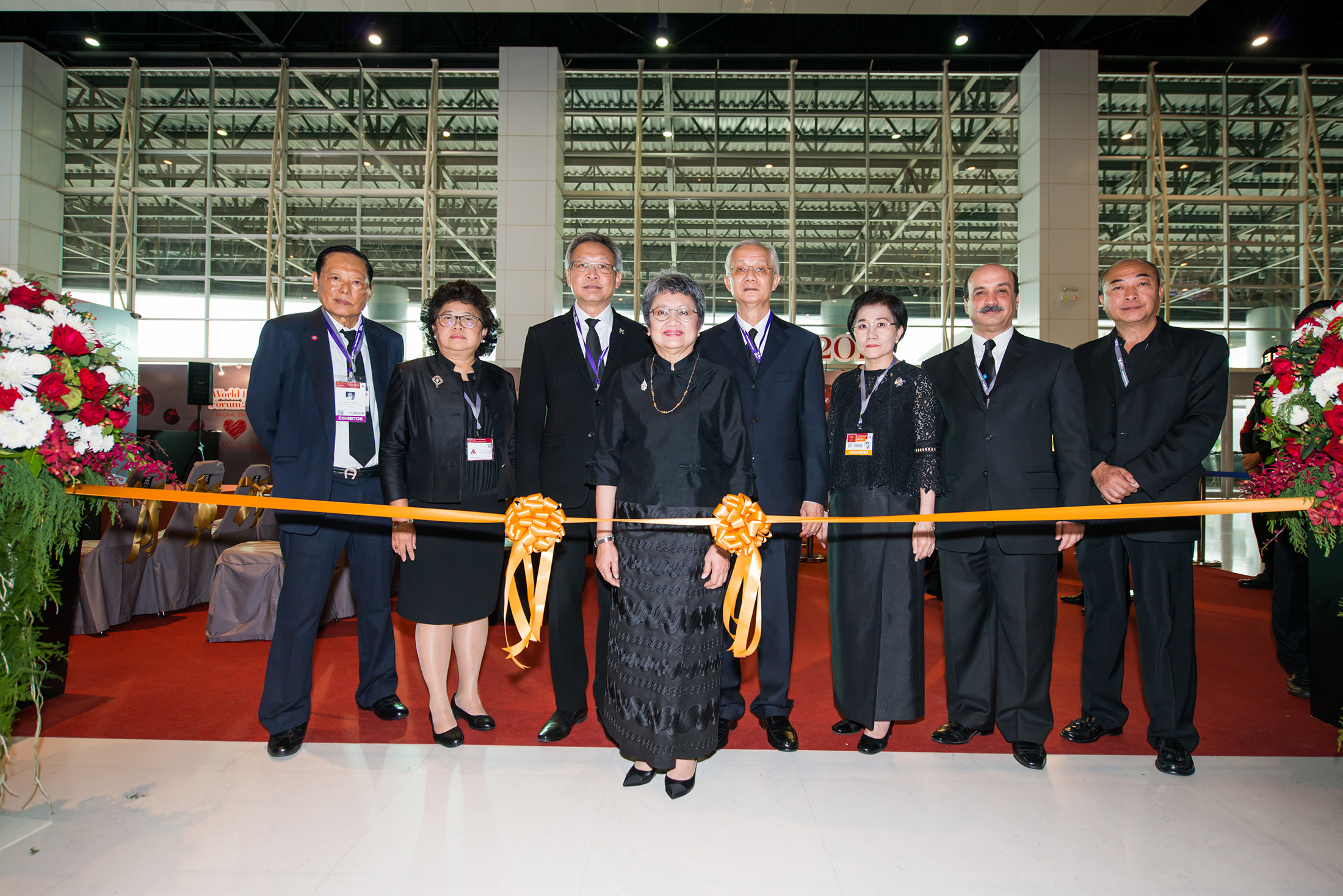 At the World Ruby Forum 2017: The Ultimate Forum of the “King of Gems”

The Gem and Jewelry Institute of Thailand (Public Organization) or GIT, under the supervision of the Ministry of Commerce, collaborated with private sectors to organize the World Ruby Forum 2017 on November 4, 2017 at Shangri-La Hotel, Bangkok, to promote, raise awareness and create accurate understanding about ruby to worldwide audiences.

“The Gem and Jewelry Institute of Thailand or GIT is the core institution that promotes, supports and develops the capability for competition in the world market for the Thai gems and jewelry industry,” said Mrs. Duangkamol Jiambutr, Director of GIT.

“We are collaborating with partners in the private and public sectors to organize the World Ruby Forum 2017 to promote, support, raise awareness and create accurate understanding about ruby to the general public, business owners in the gems and jewelry industry as well as those in the public and private sectors.”

With this event, organizers are aiming to establish ruby as Thailand’s most important exported gem and promote Thailand as the world’s leading gem and jewelry trading center.

GIT is collaborating with the Asian Institute of Gemological Sciences (AIGS), and the Association of Gemmology for France (AFG) to host the World Ruby Forum, which was announced during the International Gem and Jewelry Conference (GIT 2016). From then, GIT reached out to the Department of International Trade Promotion or DITP and business owners in the gemstones industry from across the country to form the first-ever World Ruby Forum 2017 committee that has the objective to promote Thailand’s image as the world’s most important center of gems and jewelry.
“Recently, GIT and our partners held the competition and showcase of the World’s Most Beautiful Rubies Contest which we have received great support from leading business owners across the country and other contestants that were sending in their most beautiful rubies to join this competition. Our honorable judges made the final decision about the winners. The award announcement ceremony and winning rubies showcase were hosted on September 6, 2017 in the 60th Bangkok Gems and Jewelry Fair. From this event, we would like people to recognize the value and beauty of ruby,” said the director of GIT.

“In order to promote and support the public and private sector’s initiative to establish Thailand as a leading gems and jewelry trading center, leading companies such as Beauty Gems, Veerasak Gems, Blue River Gems and Sant Enterprise are joining hands to show the country’s capability as leader of gems and jewelry through the show featuring the most beautiful rubies in the World’s Most Beautiful Ruby Awards. The show will highlight extravagant ruby jewelry worth over 3 billion baht from leading jewelry companies in Thailand that will put the spotlight on the beauty of rubies which are the ‘King of Gems,” said Mr. Suriyon Sriorathaikul.

Board of Executive Committee of the Gem and Jewelry Institute of Thailand or GIT and chairman of the Gala Dinner Night to be held at the World Ruby Forum which will take place on November 4, 2017 at the Grand Ballroom, Shangri-La Hotel, Bangkok. 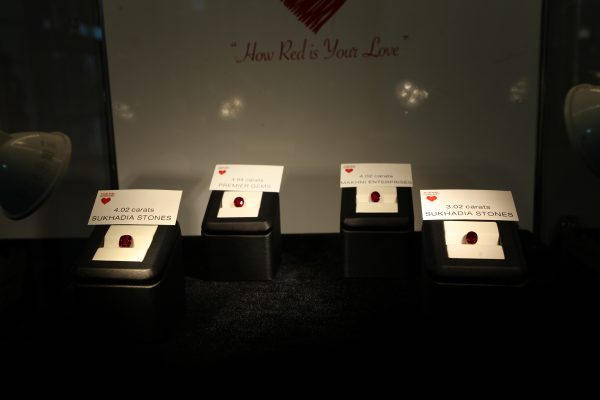 The Ruby Heart of Love is another important activity to be held at the forum. This charity activity will feature 700 rubies that will be arranged in a heart shape, conveying the love and harmony of Thais, regardless of race, religion, gender or age, that joins together as one to remember the great kindness of His Majesty the Late King Bhumibol Adulyadej in the event of 70 years of reign as well as to celebrate Her Majesty Queen Sirikit’s 84th birthday.

The Ruby Heart of Love board will have the number 1 to 700 shaped as a heart. Those interested in giving can donate in any amount they wish and pick their number. Donors will be named in the book entitled “The Ruby Heart of Love Story” which will be compiled after the rubies have been made into the Ruby Heart of Love. This ruby will not be for sale, instead, it will be held as a national treasure and organizers plan to exhibit this ruby in leading museums worldwide to promote love and peace.

Catch up with all the latest news about ruby or the “King of Gems” and witness the success of the forum, enjoy the glamorous fashion show with magnificent rubies on November 4, 2017 at the Grand Ballroom, Shangri-La Hotel, Bangkok. Limited seats are available only at US$50 (price is inclusive of lunch and coffee break) for an early bird ticket before October 25. For registration, please visit www.git.or.th or www.worldrubyforum.com. For more information, please call +66 2634 4999 ext. 636-642.
********************
For more information, please contact
Miss Pairam Wittayakom, Public Relation Officer
Mobile: +6693 229 5659
Email: wpairam@git.or.th 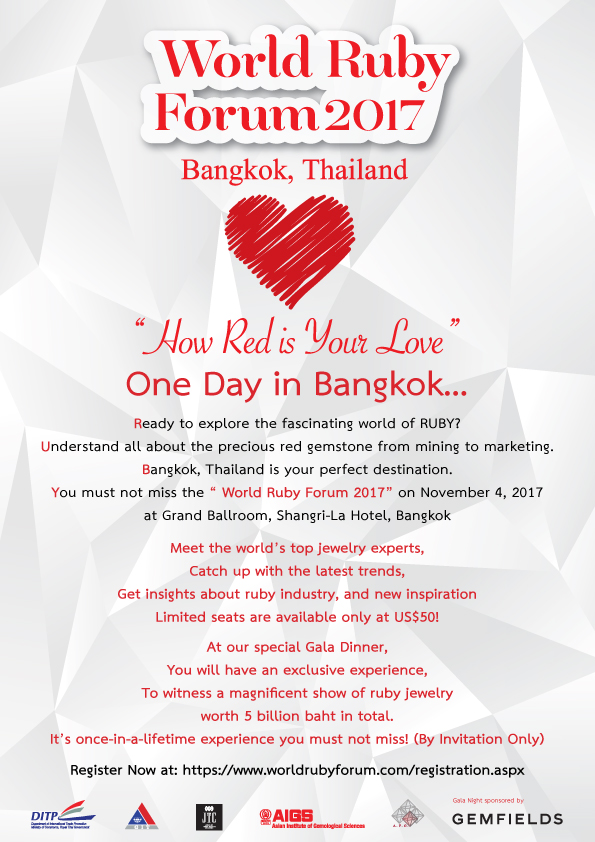